My friend Fadia treated me to a day at the Santé spa in the winelands yesterday. We first stopped on the way to buy some cheese and bread and had ourselves a little picnic on the spa grounds before our treatments. After lazing in the pool and jacuzzi exchanging girl gossip we were ‘wrapped’ in special oils and given the most divine head massage. I felt refreshed, my skin is softer than it’s been in ages, and I was tired earlier than usual last night, which is a good thing, plus I slept like a log which is rare.  Thanks again, Fadia – that was marvellous!

I think I should add a pamper package to my winelands tour and there are several excellent choices in and around the best wine estates, so I’m adding this as a research project to my list of things to do.

Why, you may ask, did Fadia treat me to a spa pamper?  A few weeks ago she was travelling through Zimbabwe, Malawi, Zambia and Botswana – alone, after having dropped off some people in Malawi. I was following her trip with interest, jealousy and much admiration. One Friday night I noticed on Facebook that she had posted a cry for help because the corrupt police in a small Zambian town had locked her up for refusing to pay a bribe.  She didn’t have a working phone but was piggy-backing the police station wifi with her iPad. I found an after-hours number for foreign affairs in Pretoria and rang them. They in turn contacted their counterparts in Zambia who helped convince the police to leave Fadia alone.

After an evening in some dodgy beer hall with her saviour from Immigration (she doesn’t drink and this, on top of her refusal to give in to the cops, earned her much respect among the locals, cops included) Fadia drove away triumphantly to the more civilised town of Livingstone.  This is just a short summary of what was quite a dramatic event – not something we would like to experience but very typical of dear old Africa, and all’s well that ends well!

So, that’s how I landed up being pampered yesterday but the real hero of the story (aside from Fadia herself for standing up to the cops) is technology – the internet and Facebook do have good uses!

First stop – Anura Wine Estate for cheese and preserves. R12 for a wedge of Brie is a bargain and it’s pretty good, too.

Next stop – Babylonstoren for bread. We bought the rooibos bread and it was delicious!
This estate has the most fabulous gardens and a full-day visit is planned for later this month.

It was a very warm day! As you can see, Fadia was dressed for summer; it was about 25 degrees – so much for winter!

Cheese, preserves, fresh bread, coffee and coke – we were happy!

The heated pool with jacuzzi in the far corner. 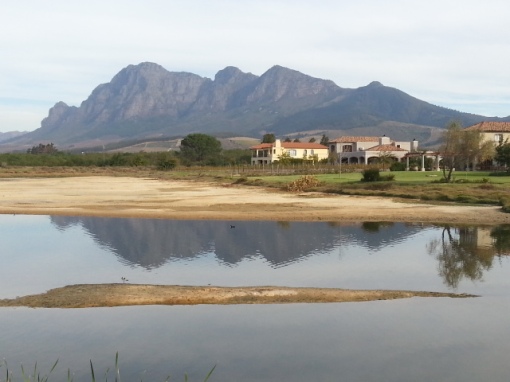 Afterwards I went walkabout in the grounds.

Posted in And beyond