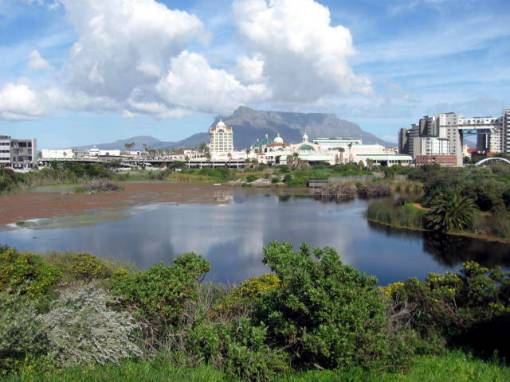 Almost everyone  I know was appalled when construction began on Century City in the late 90s.  The imported palm trees, theme park, office park, shopping mall, residential area – none of it boded well. We wanted our N1 to stay just as it was, bare and boring. We held this opinion without even realising that there were wetlands in the centre of the immense 250 hectare area.  If it was today, there’d be all sorts of environmental protests and hunger striking bunny huggers chaining themselves to the reeds. Back then we were more concerned with our new democracy than a few hundred hectares of nature. In reality, the site was actually full of alien vegetation and the wetlands were not in a good state.

Then the mall opened and of course I had a look. Big but well laid out, nice shoe shops. I still thought the residential and office areas had to be awful, without even seeing them. When I started working in one of the office complexes and my boss invited me to her home nearby I was most impressed – the public gardens were stunningly laid out with only indigenous plants, and the canal was well kept.

In the centre of it all is Intaka Island – 16 hectares of restored wetlands home to 212 species of indigenous plants and 120 bird species. You can take a boat ride or you can walk the 45 minute trail, or both – but take your camera and prepare yourself for a surprise. It’s not crowded because they don’t want to be overrun with guests until they know what capacity it can handle. There’s an environmental education centre and it’s quite obvious that all schools should make a trip to show children the various sustainable practices. Intaka is aiming to operate completely off the grid and they already do wonders with the waste from the whole of Century City, not just their own.

Site guides are very knowledgeable and on hand to escort visitors. One guide,  Skhumbuzo, was recruited by the centre from his job as a car guard when they realised he showed a great interest and potential. He speaks 9 languages, by the way, so I can’t wait to book his services for my group from Limpopo next month!

I could go on and on but I know you’re going to go and see it for yourself so I won’t give everything away now. I’ll say this, though – it’s a birdwatcher’s paradise! Intaka is Xhosa for bird. I’m not a birdwatcher and I can never remember their names, but I was thrilled with what I saw today: red bishop, malachite kingfisher (it was blue, very confusing), spoonbill something (visitors think they’re plastic bags stuck between the reeds), weaverbirds, lesser collared this, greater thrushed that, a moorhen, ducks and geese, the ubiquitous hadedas (I can’t escape them) and lots of brown jobbies, both little and medium.

My photos of the birds are all pretty awful, especially after seeing Frank’s fabulous ones, so I chose this one to show how 200 hectares of construction can secretly house a multi-purpose nature spot in the centre.