I’m used to seeing yachts and other types of pleasure craft in Hout Bay but not submarines so this one caught me by surprise yesterday and I had no answers for my clients. Obviously it’s some sort of exercise by the navy but why they chose Hout Bay is a mystery. I don’t even know if it’s one of ours because I’ve only ever seen grey ones in Simon’s Town.

I would’ve liked to see the sub in the company of this bloke whose telephoto lens the size of a small lighthouse was actually useless at Boulders because he was too close to the penguins. It didn’t stop him from taking lots of photos and laughing off all the facetious comments that everyone was making. He advised us that it weighs a ton and that he isn’t a professional photographer. I think he’s compensating. 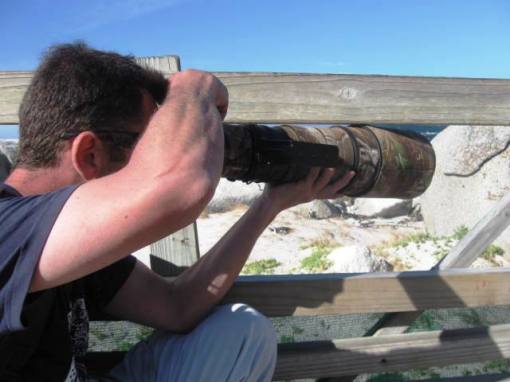 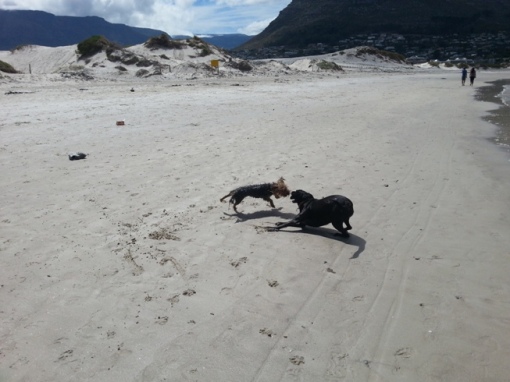 With my boyfriend Bijou on Hout Bay beach last week

Look how he’s chasing me – half my size and twice as dangerous!

I haven’t had internet access for ages so I can’t update Facebook but mom said I can guest blog to make up for it.   I’ll use the opportunity to tell you how to make humans happy. It’s not really difficult because they’re very simple and loyal creatures, most of the time, and it doesn’t take much to please them.

My mom thinks this is a very cute pose of mine and Tonton thinks he’s training us. BJ got filthy that day and Tonton was furious! I never get very dirty because I’m a girl. 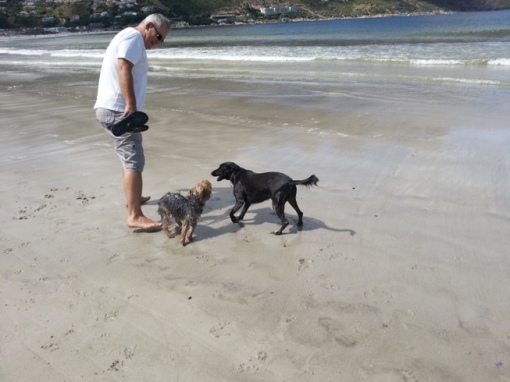 Me, my boyfriend and Tonton – man, we OWNED the beach that day! (Afterwards we had calamari!)