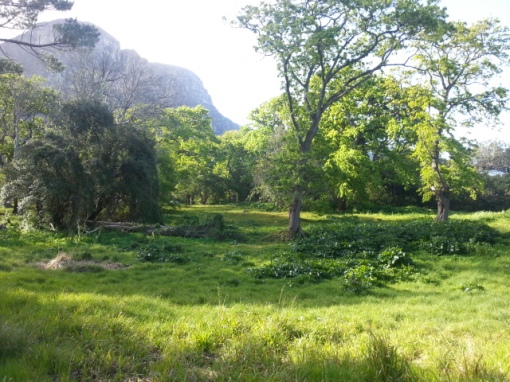 I haven’t walked in the Arboretum for ages so went there yesterday. I still haven’t managed to find out anything about this place except that it might belong to Kirstenbosch but they haven’t replied to my request for some history. I’ll keep digging.

Vida was thrilled to be here again ..sniff sniff everywhere, bounding through the long grass like a puppy, I hadn’t worn my wellies and the stream was a bit of a torrent so we walked everywhere else and then around the stream so we could investigate the other side, too. Madam was thrilled and continued running in her sleep all evening. 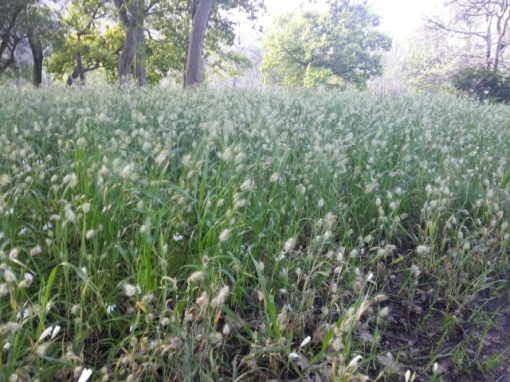 Lots of lovely long grass for a little dog to enjoy!

These trees are always a bit late .. lovely pink blossoms when they do get cracking.

Spring is pretty much everywhere

I’m totally loving the Arboretum at the moment. It is lush lush lush and the 4-legged wonder and I are totally loving it, especially now that I have wellies so I don’t poop myself  crossing the stream and tramping through the boggy parts.  Its full name is Boschenheuvel Arboretum and it’s next to the three stone houses just before Kirstenbosch. It was Cathy and Gigi who first showed it to me last September when Vida was still a little thing and now we go there often.  If I lived closer I’d go there every day, but the Constantia Green Belt is closer.

I’ve tried to research its history but am battling to find anything online, I have one more avenue to try, watch this space. The arboretum was obviously planted in an orderly manner, a long time ago.  Aside from the very old trees, some of which are collapsing from age and rot (don’t we all sometime?), there are white, pink and red camellias planted neatly along a path – in full bloom at the moment. On the roadside area where there is less shade narcissus are in full bloom (aren’t they spring flowers?) and some other little white thing I can’t name but which is very pretty and plentiful. There are lots of arum lilies, tempting to pick but I dare not even though this is not a reserve or protected place as far as I know.

Further inside, abutting the larney houses and the stream, (not yet officially the Liesbeek but the start of it) are indigenous plantings .. a large area of pink and white watsonias that I can’t wait to see again in spring, ditto red cannas, some strongly scented shrubs that remind me of curry, aloes of course, and the ubiquitous yellow daisy-type bushes that are flowering all over the Cape at the moment.  There’s a section with a plant I didn’t see much until these recent Vida walks and I don’t know what it’s called but the leaves are big and glossy green, the flowers are tall and lovely but touch them and they prick like mad. The nasturtiums are going to look divine soon.

In the middle of all this are 3 large scummy natural ponds with ducks (where Vida had her very first swim ever last year) and a smaller one which is square and cemented – I am dying to know the origin of this place! There are several paths but we generally do a figure of 8 walk which requires 2 stream crossings and takes in the whole arboretum. At the moment I don’t like to walk fast, I want to look at everything!

I need to go there earlier in the day because by late afternoon the sun disappears behind the mountain too fast for photos, but I liked this clump of narcissus surrounded by dead wood. Note the camellias in the background.