A lovely garden on a very very hot day

In preparation for a series of blog entries on my business site, I spent a few hours in the Company’s Garden yesterday. I needed good quality photos so I asked my friend Sheila to come along and take some. I bribed her with the promise of lunch at the new restaurant in the Garden.

Being vegan, Sheila always has to pick her way through menus to see what she can eat. Sadly, vegans are not well catered for. Even vegetarians have complained so you can imagine how vegans fare. I understand what vegans are all about but I don’t know if I could live without cheese and eggs. Meat, possibly, but seeing as my idea of heaven for breakfast is a good Eggs Benedict … no, not going vegan any time soon.

The restaurant doesn’t have soya milk – despite this being a common request, according to one of our many waitresses, and the entire range of sandwiches from which Sheila could’ve chosen something (sans one or two animal items) was not available yesterday. So she settled for a plate of chips. Seeing as we’d decided to have brunch instead of lunch, a plate of chips for breakfast is not exactly ideal. Sheila took some awesome photos so I feel I still owe her lunch.

Despite my earlier feelings about this restaurant  and their lack of sensitivity towards the history of colonialism in the Cape I have now eaten there three times and I must admit it is very nice (even with their very bad attitude towards tour guides) and anyway if you’re in the Garden you have no other choice for a meal unless you go into the CBD. The food is good and if you want a light lunch you can get a top quality sandwich for under R50 which includes fries and a salad. The service is usually good (yesterday we had about 7 different waitresses – possibly because we sat at the ‘loungers’ and not a table), and the setting couldn’t be more lovely. Birds, ducks and squirrels scurrying all over the place, a magnificent garden with some of the oldest planted trees in the country, and the sounds of kids playing in the play area which I suspect is what is drawing all the locals.

I previously had my doubts about a giant tree that may or may not have fallen over in a storm but it turns out that no foul play took place and the tree did succumb to a severe storm – I’ve investigated this.

These ‘nests’ are very popular with kids.

Too much shade for a good photo – but the shade is divine.

The famous tree stump – the restaurant owners decided to replant the stump in memory of the tree.

Some of the wood from the fallen tree. I’m not sure if they intend doing anything further with it or if they will leave it there like that. Sheila liked it like that, something arty or other.

After our brunch we spent a happy 3 hours strolling from cool shade to sweltering heat, with me directing Sheila to what I needed. We spotted a pigeon in distress so that distracted us for a few moments while Sheila picked it up and we tried to revive it with water only to find the poor thing had a broken neck. We couldn’t bring ourselves to put it out of its misery so we laid it down in the shade. When we returned later it had gone to heaven so we buried it under some leaves. 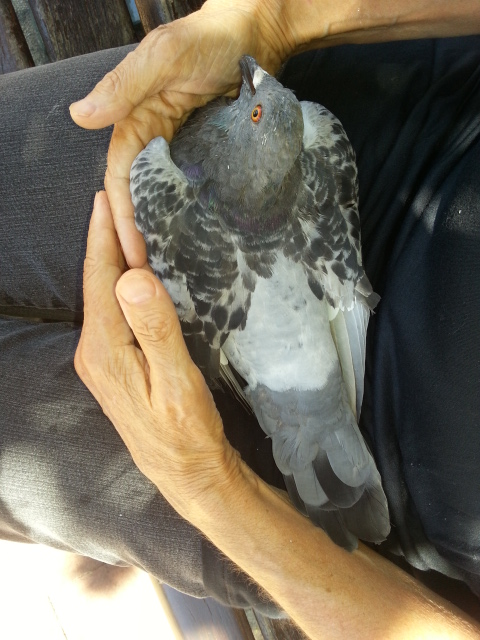 Poor little pigeon being comforted by Sheila. We also gave it water. 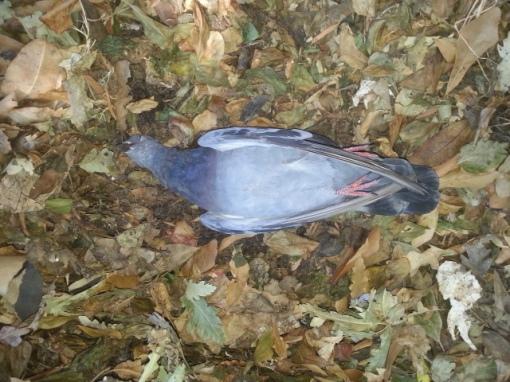 This is how we found it after a couple of hours. It had literally rolled over and died. We turned it over and …

… buried it under a pile of leaves.

The new vegetable garden is coming along beautifully, but I was surprised to find out that it is not supplying the restaurant as previously stated, and instead all the produce is being sold at the (in)famous Oranjezicht City Farm Market. 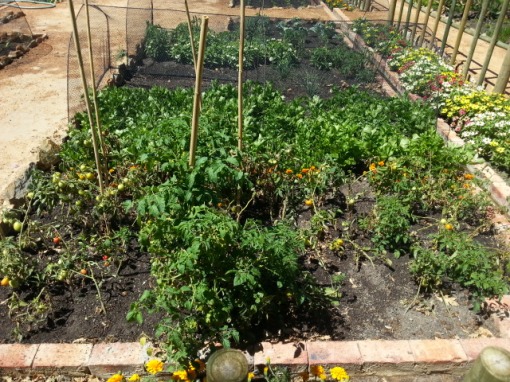 The Rose Garden is not the best aspect of this entire garden but the sprinkler was a big attraction for us as we took turns allowing it to cool us down. That’s Sheila.

Sheila then went off to protest outside a circus and I went home to fetch Vida the 4-legged wonder and took her to the beach for a late afternoon walk. I finally managed to cool down.

These are all my photos – Sheila’s will feature elsewhere.

Lovely walk on the beach.