It’s not just in Bo-Kaap where you can find houses with interesting colours!

Major panic when I was asked by Cape Town Tourism if I would do an interview for a French radio station (RFI) on the subject of gay tourism. I once spent an hour in the 567 Cape Talk studio with Soli Philander and he had to frown at me to stop fidgeting because you could hear all the sounds I was emitting, including fiddling with the massive bandage on the tattoo I’d just come from getting. (It made a ripping sound, followed by a rustle – all of Cape Town heard it).

This was different, thank goodness. It wasn’t live so my hesitations and looking for the right words will be edited out. The journo was lovely, we went into informal mode immediately (this is very important for French people – never make assumptions on this matter, always ask even if you know it’s going to be a yes. Belgians go straight into informal mode which is very disconcerting but we forgive them because they make nice chocolate and are very confused about the EU).

The topic was in light of France having recently legalised same-sex marriage. This is where South Africa can crow with pride – we did it years ago and we have the only Constitution in the world that specifically states that no-one is to be discriminated against on the basis of sexual orientation.

My journo new-friend, Solenn, wanted to focus on the commercial aspect of gay tourism so we met at the Cape Quarter. After coffee and a prep chat we walked around De Waterkant talking about the gentrification of the area and then it was off to the centre to chat to various shop owners to see what the buzz is all about and whether gay tourists really do bring in the pink rands. They do, by the way, big time.

Solenn will send me the podcast or whatever they call it in French, and I’ll be able to cringe with horror at my gravelly voice.

We grabbed a quick bite at the Food Market of the Cape Quarter – it’s small but the food is yummy, I had the perfect spring roll, best I’ve had in ages. I deserved it after managing to walk right past the Lindt shop without even looking inside.

I took a few pics along the way but stopped after a while because it was distracting the shop owners and one lady didn’t have enough lipstick on … oh the horror!

This tree grows in the wall of a house

You can even buy logs

Cheesy, touristy, but still as popular as ever 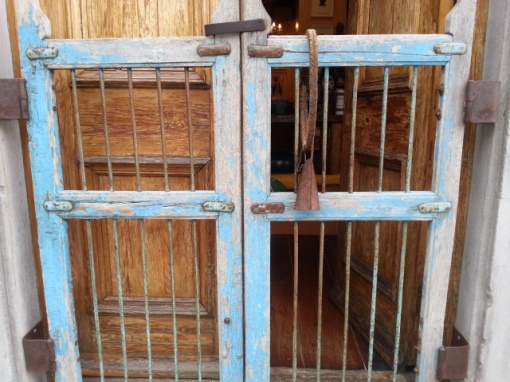 The sound of the cowbell on this old gate will feature in the interview!